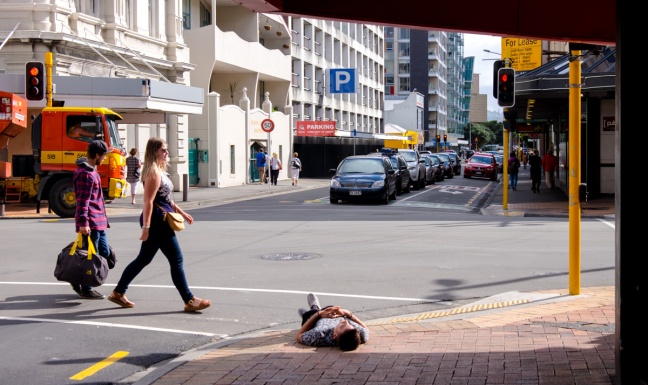 No, Emily and I haven’t been affected by all the major earthquakes in New Zealand this last month.  However, it is extremely windy and cool here. Finding warm places out of the wind here apparently leads to behaviors that other cultures would find strange.

Wellington did have a 4.3 quake last week, but we didn’t feel it.  The major quakes that are making the news are happening around Christchurch on the South Island.  It was wracked by a huge quake 5 years ago and still hasn’t recovered. Wellington, however, does lie on 10 active faults! I saw a great display at a museum of “Kiwi Ingenuity” where a New Zealander developed a system that sets large buildings on rubber pads. This system is now used world-wide.

New Zealand is rising out of the ocean fairly rapidly. This photo is of the isthmus between two mountains in Wellington.  Around 1000 years ago it wasn’t there.  The Southern Ocean on the horizon flowed straight into Wellington Bay on the lower left.  3 major quakes (in recorded time) 1600s, 1850s, and 1930s, have raised that area up.  It is now the airport and flat suburbs. 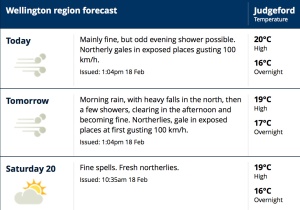 But check out the weather page from yesterday.  For 3 days we are having “Fresh” northerlies.  I guess that means winds of 100 km/h – which translates to 60 mph. Nobody makes a big deal of it. Life goes on. No one loses power. Native trees don’t break. Wellington locals think it quaint that Chicago calls itself the “Windy City”.  Chicago is tame compared to here.

This following photo was up at Mount Victoria on a beautiful but windy day. No one could do anything.  The tourists who were wearing dresses couldn’t take selfies because they had to hold their dresses down. Wearing a light billowy dress in Wellington is a sure sign that you are a tourist. Actually everyone was having a hard time taking photos; to get things sharp you need a shutter speed of 1/1000.  The camera in your hand is just vibrating and swaying all around.  No silence here.  You couldn’t hear anything. 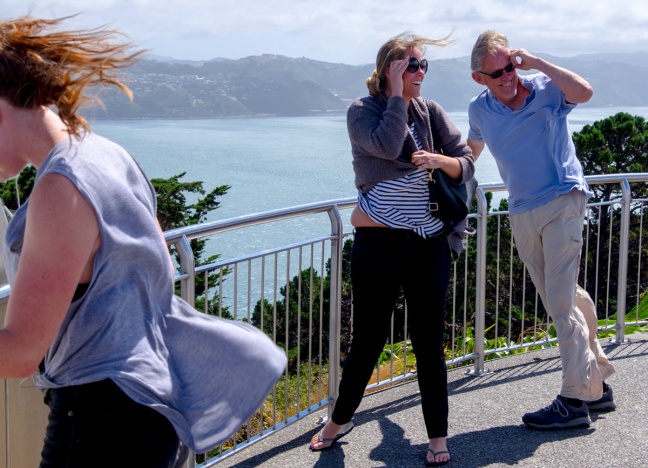 And if you are curious about the opening photo for this post.  The man really was just lying there to get out of the wind and warm up.  I watched more than 20 people stop by and ask him if he was OK.  He was just fine. At a few points during the blustery day I was about ready to follow his lead.