Those are sea kayaks against mountains that go up over 5,000 feet.  And the kayakers aren’t floating 15′ above a nice flat sandy beach bottom.  Those mountains continue their incline straight down.  The waters are deep. This post builds on the two previous ones about Fiordland: Milford and Doubtful Sounds

So I’ve been enjoying wrestling with just how big those fiords are in relation to us tiny humans.  Two attempts here.  The first is from the guide on the cruise.  The straight cliff that the kayakers are against in this photo to the left is three times higher than the Empire State Building. It is almost 4,000 ft tall.  And the arm of the sound that they are in is a touch wider than 6th Avenue.  I didn’t have a wide enough angle lens to get the whole shot.  So, just imagine paddling your kayak down 6th Avenue and all the buildings are 3 times higher than the Empire State Building. Plus, you don’t have the subway below you, you have more than 500 feet of water.  And there is no noise.  Absolute silence.  Pretty intense.

The second attempt is my own. At the Imaging Research Center we have been virtually rebuilding Baltimore as it was in the early 1800s.  It is an ongoing process, but we have done one major release of what it looked like.

The terrain and buildings are scaled accurately and everything is in 3D.  I have to work on this project over the next week and therefore have the whole 3D model with me on my laptop.  So guess what? … I decided to quickly see how big Milford Sound’s Mitre Peak would be if it was in Baltimore.  So I made a cone that was 5,560 feet (1,690 m) high at the same scale of our model of Baltimore in 1815 and stuck the cone right on top of Fort McHenry. 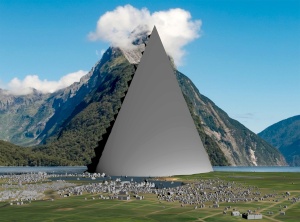 Then I brought in the photo of Mitre Peak and made it the same size as the cone. This is done pretty fast, but it is close. This isn’t exaggerated. Federal Hill is 80 feet high (the brown cliff in front of the cone).  The current Baltimore World Trade Center at Inner Harbor is 400 feet high (not shown). They both sit at sea level.  Now throw in a mountain that is a mile high with almost vertical cliffs.

So here is the final.  Baltimore sitting in front of Mitre Peak. This begins to give a sense of what Fiordland feels like.

Factoid.  Mitre Peak got its name because its distinctive shape looks like the mitre headwear of Christian bishops.

Tip.  If you are renting a car to drive around Fiordland, get one with a sun roof.  That is the only way you will see the tops of mountains.

One thought on “Fiordland: Trying to Scale the Sounds”