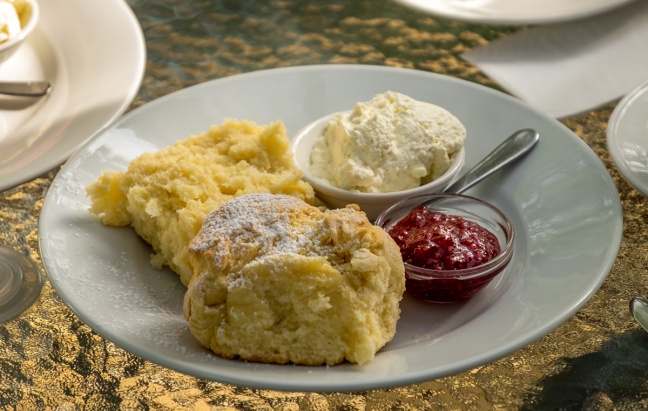 OK. You can all roll your eyes, slap your forehead, make the “L” sign at me, whatever, because for the last few months everyone has been saying “Oh, you’re going to Australia and New Zealand, make sure to have a Devonshire Tea.”  And so I am thinking something like Earl Grey…  Well, no longer.  I am finally a citizen of the world and now know that a Devonshire Tea has little to do with tea and has everything to do with scones, raspberry jam, and whipped cream. Peter knows his Devonshire Tea establishments, and so here we go…

First stop was The Possum Shed.  Far from any major town.  When discussing Devonshire Teas with anyone we have met, The Possum Shed is mentioned first. The scones are nothing like the ones in the States.  Here, they are more like an American biscuit – and a pretty incredible biscuit it is.  It would put some southern and mid-western expert grandmother bakers in a tizzy trying to best them.

But according to Jill, a friend of Peter’s who grew up on a farm in Devonshire England where it was created, a Devonshire Tea really only comes down to the cream.  It should be clotted cream.  Handmade.  Due to current health regulations on raw milk, no one can make clotted cream anymore. The current attempts at substitutes are horrible, she says as she shudders.  She also mentioned that the only real controversy with Devonshire Tea is between Devon and Cornwall, England.  In one, you put the jam on the scone first, in the other you put the clotted cream on first.

Next stop is the Hamilton Inn.  Not too much in Hamilton except this historic Inn.  The Hamilton Post Office is even in the Inn, along with a Pub and Cafe.  We had come because Dorothy is famous for her Devonshire Teas. Apparently everyone knows Dorothy.  Here is a photo of Dorothy in her Hamilton Inn Cafe.

You can’t see her, but she is there.  She is petite and was having a bad day.  She is hiding behind the espresso machine and cash register.  She was not looking forward to having to serve lunch to a bus load of senior citizens who were showing up soon. She said she had no scones and couldn’t do a Devonshire Tea.  So Peter went into his sweet-talking, name-dropping, all-out-adorable routine and within 5 minutes Dorothy realized that she did have some scone dough, just made this morning, and if we could wait 15 minutes she would bake some.  We elected to wait.  I walked around the Inn –

And here it is.  Our second Devonshire Tea. Incredible.  More are certainly to come, but I won’t bore you with the documentation…